As a broadcaster, Mark was crawling the studio floors before he could walk or talk. So, it’s no surprise he developed a strong taste for the industry.

An AFTRS graduate with time spent at 2RG Griffith, then back to Sydney with 2KY (now Sky Sports Radio), 2GB. Mark joined Network 10 as a 22 year old, calling the prestigious Commonwealth Bank Cup.

After all, he's a Warren.

“Without doubt, having our Riddick Bowe vs Evander Holyfield II broadcast interrupted when a bloke flew into the ropes, known as ‘The Fan Man’. Introducing Mike Tyson’s Tale of the Tape for his one man show in Sydney for Max Markson and also introducing the legendary Sugar Ray Leonard, again for Max Markson supporting Variety Australia – Children’s Charity”.

[Top Right] Mark with Jeff with one of the greatest boxers of all time, “Sugar” Ray Leonard, world champion in five different divisions. Superstar! 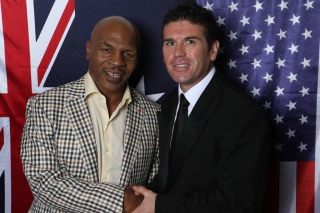 Mark has been at the centre ring in commentary for some of the biggest fights in Australia and abroad. He travelled with his confidante and dear friend Johnny Lewis to cover eight Kostya Tszyu championship fights in the United States. He called the Fenech Nelson II fight from ringside into an old ‘brick’ mobile phone, given permission from the late, great, Break-Even Bill Mordey. Jeff Fenech and Max Markson invited Mark to be the ring announcer for Fenech Nelson III – The Third Dance.

Grantlee Keizer (Author: The Graham McNeice produced ‘That’s Boxing’ & just released the ‘Jeff Horn Story, The Hornet’), wrote to Mark, “Thought you did a great job, Mark. Spoke to Ray Wheatley today and he agreed. You have great passion, a golden voice and terrific knowledge of the sport. Keep up the great work, mate.”

Being a part of the first free to air boxing coverage in over 25 years as a commentator and ring announcer for Channel Nine’s Jeff Fenech Footy Show Fight Nights. Mark then travelled to Japan with Billy Dib as a presenter/reporter as Dib shot for history in his quest to become the WBC super-featherweight champion.

Well, World Championship Baby Crawling Content (a NOVA parody, actually); to the Townsville Show; Longboard World Championships in Taiwan; commentating a 1,500m race out the window of a pink stretch Hummer at the Pirtek Athletic Allstars; in the presence of the Armenian President, Mark was centre ring at the Karen Demirchyan Concert Arena for their National Idol, multiple world champion The Raging Bull, Vic Darchianyan where boxing met music, met Eurovision; and then there was the World Championship Pole Dancing (that’s another story…)

A dynamic broadcaster, MC and auctioneer, Mark dedicates an important part of his time working for charity – in no small way, a reason for Mark being an Australia Day Ambassador in 2015/16 and again in 2017.